The Correct Amount of Promotion

Many times a small business owner will come to me wanting help with marketing. The first thing I will do is look at what promotion they have done so far and what has been effective. 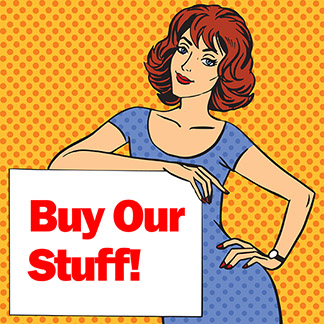 But now they have decided they want to expand, so they are looking into doing more promotion and marketing.

One of the most important concepts I try to get across to new or old clients is: you need to promote your business on as many different channels and media as you can, as broadly as you can, on an ongoing basis.

Now this appears to be a hard concept for some small business owners to understand. But the ones who do get this and apply it are more successful.

I will tell a story of my own experience recently which illustrates this idea. I have been doing my Real Web Marketing Inc. business full time for 8 years (anniversary coming up next month). Over that time I have mostly relied on email marketing, sending out a regular email newsletter, sending that newsletter also out to a membership email list, and sending promo emails to various email lists I have bought.

But over the last year or so I noticed that response to email marketing was declining. Then I started thinking about email open rates, realizing that only about 10% of recipients even open an email today. So I realized that even past prospects and even past clients weren’t necessarily hearing from me regularly, as I had thought they were.

So I decided to increase the promotion I was doing, to other media.

The result? We found our leads coming in increased dramatically. They didn’t all come from the sources we thought they would. And our company income was highest ever in April, and then again highest ever in May.

Once again, the principle is you need to promote your business on as many different channels and media as you can, as broadly as you can, on an ongoing basis.

The trick is to find media and types of promotion that will work for you. And to try out media that you can afford, at a pace that you can afford. Realize that you are going to have to try things out and see how they work. But don’t be too discouraged if you get leads from other sources than where you promoted. It works that way sometimes.

It’s a little tricky. You might think that one promotion isn’t working and isn’t contributing to your higher leads and sales. But then you drop it out and they fall.

But even if you find one type of promotion didn’t work at all, drop it but replace it with something else. Keep the volume high.

Good luck with your promotions.