In the Star Trek universe, our universe is filled with matter. But there is also anti-matter, and supposedly the controlled combination of the two produces energy powering ships traveling about the galaxy.

But of course you have to be careful in how you combine the two. If you don’t know what you are doing, or if that anti-matter containment field gets ruptured, it’s gonna blow. And you don’t want to be within a couple of light years when that happens. 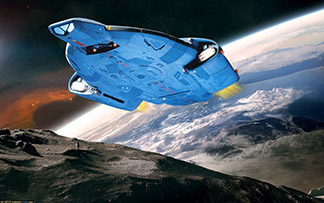 What you may not be aware of, is that there is another “anti” substance existing right now in our very midst, unsuspected, in this universe, right now. Can you keep a secret? Because I’m not sure the world is ready for this revelation. OK, I’m sure I can count on you.

This substance is called “anti-Marketing.” You may have already seen the signs of these anti-Marketing particles, without even knowing it. I don’t want to alarm you, but I think you have a right to know.

The anti-Marketing particles began leaking into our universe in the early 1990s, and they began attaching themselves to the brains of IT managers, first in the United States, then spreading throughout the world. There is some evidence supporting the idea that these early anti-Marketing particles were able to transmit themselves via the early Internet.

One of the earliest outbreaks of the plague of anti-Marketing particles began in the late 1990s with sites that were formed to keep people from marketing via email, and through a prominent author who wrote a book proposing the idea that you had to have permission before communicating. So addled was his brain by the anti-Marketing particles that he didn’t the see the flaw in his reasoning, that you would need to communicate to get permission, before you could be allowed to communicate. So basically no one could communicate.

Of course, a number of marketers around that time became infected with another disease, namely “overuse the $#@% out of your email lists.” Some observers felt this disease caused the initial leakage of anti-Marketing particles into our universe and they’re probably right.

One of the largest Internet companies became heavily infected with anti-Marketing particles in the mid-2000s. One of their spokesman became entirely infected, proclaiming a set of rules that website owners had to follow, and standing up in front of audiences at tech trade shows and demonstrating to the crowds how his company would find them and penalize them if they didn’t follow the rules. Later the company tried to soften that spokesman’s image, showing how he was a “nice, regular guy,” but savvy observers had already noticed the total infection.

One of the rules put forth by this big company was that whenever you wrote any articles or other content, you could only put that on one web site, otherwise that was called “duplicate content,” which was heavily demonized and eventually considered by most people as low as being a Congressman.

Soon this company began working on its algorithm, and the algorithm became heavily infected with anti-Marketing particles. The algorithm became basically an automated robotic entity, searching out anyone successfully marketing their website via free means on the Internet and penalizing them.

Then the big company started taking useful information away from marketers, though never giving any reason why. Of course we know the real reason – the infection of anti-Marketing particles. You know what I’m talking about.

Some marketers became infected with the anti-Marketing particles themselves, and began spouting ideas like “inbound marketing only,” where you don’t send anything out to promote anything but only wait for people to look for it, and “outbound marketing is dead,” and the latest nonsensical idea, “content marketing,” where you just put up great content and people will automatically find you (though how that happens is never quite explained).

Then in the early 2010s, we saw the full infection of the social Internet web sites with anti-Marketing particles, severely limiting the number of new friends and followers, and charging money to send out communications that used to be free. The infections caused some sites to just cost a lot more to use for marketing, while others became so filled up with anti-Marketing particles (140 particles at a time) that they became impossible to use for marketing.

Some of the Internet philosophers wondered whether the changes made by the big websites were based just on money-motivation, i.e. forcing people to pay the company money to do things they used to be able to do for free. Others said it was just the spread of the anti-Marketing particles throughout the known universe. Others became infected themselves and simply accepted the blocks put up by the big companies, or even parroted the press releases of the big companies themselves. Some said the combining of marketing with anti-Marketing particles produced people resembling sheep.

Other Internet philosophers realized that they needed to thoroughly map the Internet universe and find which gateways offered unrestricted flow of marketing particles, and which gateways blocked marketing and combined it with anti-Marketing particles, rendering the marketing effort inert. These forward thinkers found that by utilizing the remaining unrestricted gateways, and by routing some of their marketing strikes completely outside of the Internet marketing universe, that victory could still be had.

Tune in next week for specifics on which gateways are blocked and which are still unrestricted.