It’s all well and good to teach somebody how to set up social media accounts and all that, but a vital step in the whole process is to also teach them how to reach their specific target public with social media marketing.

Every business has what is known as a “target public.” This means a specific type of person or business that will buy that type of product or service. 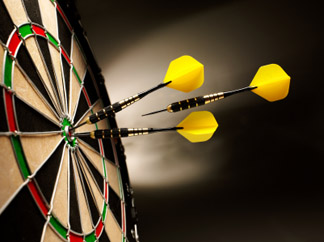 For consumer products, there are likely demographic factors that would tend to identify the target public, such as age, sex, income level, interests, or hobbies. Like for a dance studio, the target public would most likely be young girls, ages 4-21, with an interest in dance. For a pet store, obviously it’s pet owners.

For business to business marketing, often you are trying to reach owners or executives of a specific type of business, i.e. dentists, home improvement companies, software companies, or whatever. Or you might be targeting businesses of a certain size, i.e. 20-100 employees, or a certain level of company income per year.

So the key with social media is to connect with people who would most likely be prospects for your product or service. You want to add those people to your friend, follower or connections list, on sites like Facebook, Twitter and LinkedIn, which are the big three social media sites.

So how do you target them? That varies by site.

Twitter is probably the easiest site to target specific publics. With Twitter you locate people that are your target public and then follow them, and then a certain percentage will follow you back. The idea is to build up the number of people following you, because those are the ones that will potentially see your messages.

Using the above you can get creative and figure out how to target people who would be your prospects. Then follow them and get them to follow you back.

It is also important to send out messages (tweets) yourself, about what your business is doing, as other people will search for keywords that you are using, and will follow you.

With Facebook one technique we use to target specific publics is to have the client join several Facebook groups that pertain to his particular industry and where the members of the group would be potential prospects. Then start friending those people.

For example, we have a client who does tax consulting for people buying airplanes. So for him we have had him join aviation type groups and befriend people who are members of those groups.

After a while you will build up enough friends that the “friend finder” will show people who have a lot of friends in common with you, and likely those people will be potential prospects too.

Similar to Facebook, there are many groups you can join on LinkedIn. Then you can start proposing connection with people who are members of those groups.

Ping.fm is a site that allows you to create an account and then hook up all your other social media accounts to it. Then you can send out a message or status update using Ping.fm, and it will go out on all your social media accounts. It allows you to type in something with a max of 140 characters, just like Twitter. This is a handy way of saving time in sending out your status updates, since you only have to log in to one site, not three or more.