The Galactic Marketing Alliance and the Googlion Sector

by admin | May 27, 2014 | Internet Marketing, The Galactic Marketing Alliance

Throughout the 2000s decade, brave members of the Galactic Marketing Alliance discovered free passages through the organic wormholes into the Googlion Sector, and were able to reach Googlion citizens with their marketing messages. 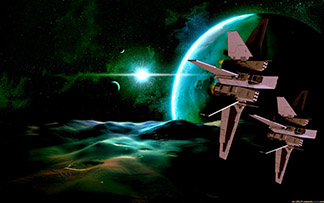 Passage through the organic wormholes was still long and arduous, as Alliance members had to largely guess the way, since Googlion officials carefully kept all maps of the region secret.

But since enough Alliance members, especially those from the SEO sect, made significant progress through the organic wormholes and were able to reach the Googlion masses, Googlion officials infected with significant amounts of anti-Marketing particles and exposed to the element greedium, decided that they had to do something about it.

Googlion Press Secretary Mattius Cuttsemoff lamented “It isn’t that we’re against marketing you understand. And of course we’re not biased against the Alliance or members of the SEO sect. We’re really not trying to destroy the SEO people. Really. It’s just that, you know, they’re, well they’re gaming the system! It should be obvious to all that gaming our system is just the ultimate crime that anyone can commit in this day and age. Don’t you see that? It’s a matter of ethics. And believe me, we know ethics. We are, and justly should be, the ultimate arbiters of ethics in all sectors.”

Googlion officials launched the ultra-secret “SEO Destruction Protocol” in 2010. Recently uncovered secret documents show that the true goal was eradication of the entire SEO sect by completely blocking their passage through any of the organic wormholes to reach Googlion citizens.

The initial steps of the protocol involved blocking so-called “reciprocal” links between Alliance members and like-minded Googlion citizens. Thus began a four year campaign to stop Alliance members from developing links to Googlion citizens, despite earlier statements from spokesman Cuttsemoff and others, stating that such links were OK and were totally sanctioned by the Googlion government.

Next on the protocol agenda was the attack on all “Article” satellites orbiting the Googlion home world. These satellites held thousands of high-value information articles that Googlion citizens could access 24/7, and which developed links to Alliance ships entering the sector through organic wormholes. Cuttsemoff stated that such article satellites allowed links from “bad sectors,” warning people to stay away from the satellites and not to link to them.

Over the next four years, Googlion laser weapons systems took down satellite after satellite, reducing the numbers of article satellites from over a thousand to less than 75.

Next on the protocol agenda was the destruction of pressium releasium satellites orbiting Googlion. At first spokesman Cuttsemoff simply stated that establishing links with pressium releasium satellites was bad. His initial hopes were that statements like these would scare off Googlion citizens and Alliance members who were cowed by and religiously believed anything he said.

Cuttsemoff publicly stated “We are trying to destroy SEO’s? Of course that’s a joke. Ha-ha. Ha-ha. You can tell I’m joking, right? But you know, those pressium releasium satellites, well, they’re just, you know, unethical. It’s all ‘black helmet,’ you know. They’re not as bad as ‘article’ satellites, but they’re still bad, bad, bad. And we’ll catch you if you use them, and you know, penalize you.”

The recently uncovered secret documents showed that Googlion officials planned to destroy access to Googlion citizens via the free organic wormholes, to force people into using the expensive Adwordsial gateway. This gateway was the primary source of revenue for the Googlion government, generating $30 bazillion per year. Of course, smaller ships couldn’t even use the Adwordsial gateway, and so smaller Alliance member companies were denied access to the Googlion sector.

Secret communications from Cuttsemoff to senior Googlion officials were uncovered recently, where Cuttsemoff stated “We figure that by destroying the free organic wormholes, and forcing everyone to use the Adwordsial gateway, we can increase our revenue from $30 gazillion to $60 gazillion per year. And the smaller Alliance members who can‘t afford it, well that’s just too, too, too bad.”

Prominent Alliance member Nebula Fred stated “Googlion created the organic wormholes and initially told us that the number of links that you had through the wormholes would determine your access to Googlion citizens. Now we learn about the secret and vicious ‘SEO Destruction Protocol’ and that they have worked constantly to destroy access to the wormholes.”

“My thought is we should go around Googlion and their silly rules and protocols. We should use the Emailicus message protocol, use the Social Quadrant, the YouTubion sector, the Directial Maileron gateway, and any other method of going around Googlion. And we should even use the Adwordsial gateway for members where it is appropriate and workable. But Alliance members shouldn’t have to bow to Googlion. I won’t, and I pity the poor fools who do,” concluded Nebula Fred.