The Galactic Marketing Alliance and the Social Quadrant

The last two years have been hard times for members of the Galactic Marketing Alliance (GMA), in their efforts to travel to and trade in the Social Quadrant. But daring and innovative GMA members are now making progress in opening up gateways into the embattled region. 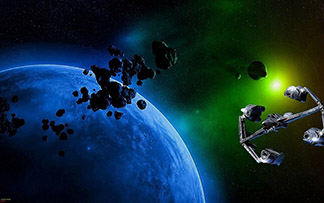 Twitterium: The government of the Twitterium planet became completely infected with anti-Marketing particles in late 2012, and decided to completely block all new members of the Galactic Marketing Alliance from approaching their planet. Only those who had previously developed thousands of connections to citizens of Twitterium could get any communications through.

The government issued numerous pronouncements regarding newer and increasingly onerous limitations on members of the Alliance. Some of the pronouncements stated that it was not “nice” for Galactic Marketers to try to enter their solar system at all or attempt to contact their citizens, and particularly forbid Alliance members from using the “Churn” frequency or using any evil software.

One daring Alliance member, Nebula Fred, refused to go into agreement with the pronouncements and blocks from the Twitterium government. Though he had several ships shot down on his early attempts, in the last two months Fred’s crew from their starship “Texas” have found a new combination of channels allowing them to gain new volume followers on the planet’s surface.

FaceBorg: The entire FaceBorg system became highly infected with anti Marketing particles, as well as by another particle known as greedium. Galactic Marketers interested in passage through the FaceBorg system (which used to be free), now faced heavy fees entering the system, and for sending communications to the citizens of the planet FaceBorg IV.

Nebula Fred attempted at first to work around the new restrictions of the FaceBorg leaders, but finally concluded that the greedium presence was too strong. He agreed to pay the heavy fees for entering the system and using the FaceBorg communications network. “They betrayed the trust of the Alliance,” stated Fred, “But I still think their network is important and so GMA members need to pay the fees and get on with it.”

LinkedIno: The LinkedIno system offers excellent opportunities for Galactic Marketers to reach the citizens of that solar system. The government there seems to actually like people to come to their system, connect up and conduct trade. The officials there may have been affected by the nearby nebula, whose particles act as a natural deterrent to anti-Marketing particles.

Nebula Fred stated “We have had good success using the LinkedIno email frequencies with promotional message bursts once a month.”

Nebula Fred has been producing the moving picture and sound pieces for several years, and recently got new training in how to use these to sell products to YouTubion sector citizens.

In summary, Nebula Fred stated “You can’t let these Social Quadrant anti-Marketing types get you down or let them stop you. Members of the Galactic Marketing Alliance are fighting the good fight in helping their clients prosper, by defeating the attempts of the anti-Marketing people to stop them.”